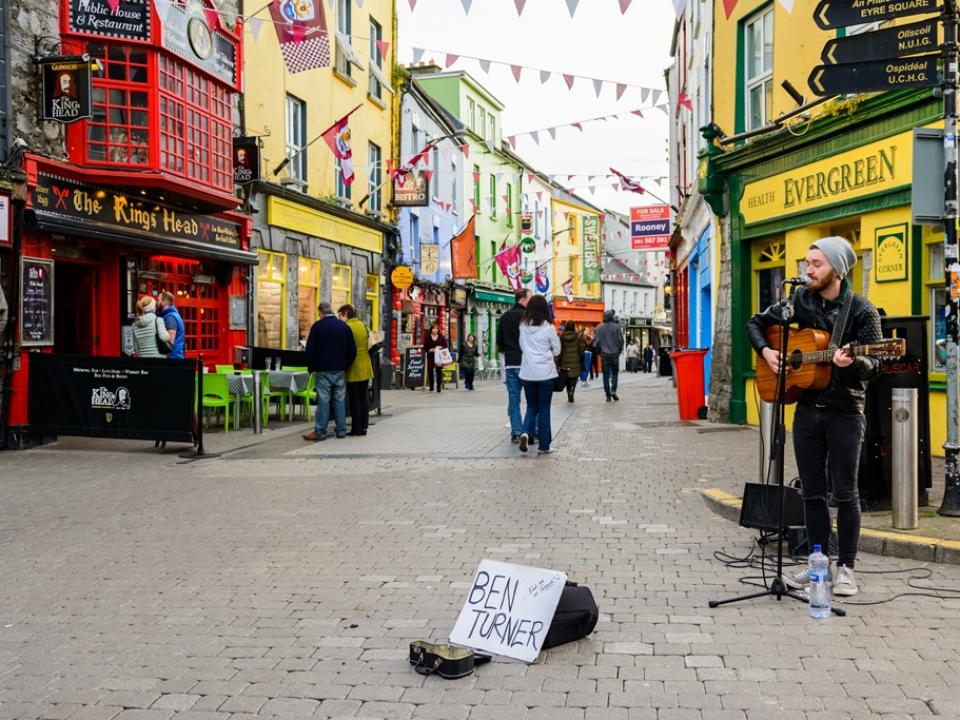 Ireland is an island on the western edge of Europe. It is 486 km (300 miles) long and 275 km (150 miles) wide. Politically, the island is divided in two. The Republic of Ireland covers 26 of the 32 counties and its capital city is Dublin. The remaining 6 counties comprise Northern Ireland, which is part of the United Kingdom. The main city of Northern Ireland is Belfast. The information here has been compiled specifically for the Republic of Ireland, and provides practical information for every day life.

The Republic has approximately 4.8 million inhabitants. Northern Ireland has a population of around 1.8 million.

Ireland observes Greenwich Mean Time (GMT) in the winter. However, Irish summer time is GMT plus 1 hour. The dates of change are the last Sunday of March and October. The clock goes forward by one hour in March and back by one hour in October.

The electrical current in Ireland is 220-240 volts AC. Standard plug sockets are are 3-pin flat type.

Dial 999 or 112 from any phone for police, ambulance, fire, sea and mountain rescue services.

In Ireland, the police are called An Garda Síochána or Gardaí for short. Full details of national and local Garda stations can be found at www.garda.ie.

Please note that the Euro is not used in Northern Ireland, although it may be accepted in some stores.

The weather is quite mild given Ireland's high latitude. The average number of wet days (with more than 1mm of rain recorded) ranges from around 150 days along the east and south-east coasts to about 225 days a year in parts of the west.

Temperatures rarely fall below freezing point in winter, but can sometimes feel that way due to easterly winds. Irish summers may be considered good if the temperature rises above 16 degrees Celsius, though some parts of the country routinely have higher temperatures, and 30 degrees is not unheard of, although it is rare.

Irish weather can seem harsh to students who come from a warm climate. Dampness in winter can be a particular problem by making it seem even colder. Also, the wind is not as dry as in some other countries, so even a relatively modest shower combined with a cool, strong breeze can create an unpleasant driving rain.

Preparing for the weather

The best way to prepare for Irish weather is to make sure you have warm clothes which will protect you in all types of weather, and to use layering - wearing T-shirts or shirts to which you can add sweaters, jackets and overcoats, depending on how cold it is.

You should have at least one waterproof coat and some strong shoes. Gloves, hats and scarves are also very effective in defeating the cold, as are thermal underwear.

Similarly, you should prepare for night time temperatures with warm blankets and bedding.

To study effectively, it is important to keep the rooms you work in warm enough. However, avoid raising temperatures too high - heating can be expensive and high indoor temperatures can make you feel even colder when you go outside.

Banks are open between 10:00 and 16:00 Monday to Friday, (some smaller branches may close for lunch; check locally). On Thursdays, banks stay open until 17:00 (this applies to the Dublin area - other late opening days may apply in other parts of the country). There are variations in opening hours so check these with your own particular bank and branch.

Virtually all university and college campuses now have a bank branch on campus. ATM machines are widespread and can be accessed with debit or credit cards. Most banks provide Bureau de Change and Travellers' Cheque facilities. Many banks will waive commission if you are a registered student with an account at that bank.

Ireland's public health service is managed by the Health Service Executive (HSE). However, on most occasions when you are sick you will visit your college health service or a private general practitioner (GP). You can find your local GP here.

In an emergency, go to the Emergency Department (ED) at the hospital closest to your home. The ED charge is €100 for non-medical card holders who attend without a referral letter from their GP. If you have a letter of referral, there will be no charge. For short-term students (less than 1 year) from non-EEA countries, this charge can be up to €506, depending on the hospital.

The public hospital statutory in-patient charge is €80 per day. Be prepared to queue and wait. Information on the location of health services in your area can be found on the HSE's website.

For more information, see our guide on Your Health.

Shops are generally open Monday-Saturday from 09:00/10:00 until 17:30/18:00. Many also open for more limited hours on Sundays and Bank Holidays, particularly larger shops. Smaller grocery stores and newsagents will normally open at 08:00 and remain open until 21:00 or 22:00 each day, though these shops tend to be more expensive than the big supermarkets. (Some of the larger supermarkets also have late opening hours; check locally.) Bigger cities will have a late opening night on Thursdays, when many shops of all kinds stay open until 21:00.

There is a levy (tax) on plastic shopping bags to encourage people to reuse their old bags and cut down on litter in the countryside and cities. If you require plastic bags, you will be charged 22c each for them, so it is advisable to bring your own reusable bags when you go shopping.

College Clubs and Societies
Participation in college clubs and societies is a very effective and cheap way of getting involved in college social life. In all colleges, there is a range of clubs you can join at any time of the year. These include sports clubs, academic societies, dramatic societies, political societies and much more. For example, there may be a Film Society in your college which shows films at a reduced rate, so check the college notice boards for screening times etc. Some are more active than others, however they are cheap to join and a definite way to meet new people and have fun. The Student Handbook produced by the Students' Unions usually provide a guide to the various clubs and societies. You should also check your student union website.

Cinemas
Cinemas in Ireland are very popular, but can be quite expensive, especially on Friday and Saturday nights. It is cheaper to go to the afternoon shows and during the week, and there is often a student discount available on production of a valid student identity card for certain shows. Some cinemas will also have special student days where, for example, all screenings are half price for students on Tuesdays. You can find your local cinema at usheru.com.

Theatre
Ireland is famous for its theatre and well-known playwrights. Visit irishtheatre.ie for information on what is on in theatres around Ireland. A student discount is usually available on production of a valid student identity card.

Music
There are gigs and concerts every night of the week all around Ireland. Find listings at entertainment.ie.

Pubs
The pub is the social meeting place for many Irish people. They serve alcohol, soft drinks, tea and coffee. Many pubs serve meals during the day, with some serving food until 21:00-21:30. Pubs in Ireland are also great places to go if you like live music.

Pubs and bars are licensed to open from 10:30 to 23:30, Sunday through Thursday. From Friday to Saturday, the closing hours are extended to 00:30. Many venues are licensed to stay open until 02:30 at weekends. All pubs in Ireland are closed on Christmas Day.

For more, see our information on the Cost of Living for Students in Ireland.

The smoking of electronic cigarettes is also forbidden in many places.

Your college campus may have further restrictions on smoking, such as designated smoking areas, or even a complete campus-wide ban.

The male/female designation is often in the Irish language. You should go through the door marked FIR if you are a man and MNÁ if you are a woman.

On your college campus, you may come across gender neutral toilet facilities, which can be used by anyone. If you prefer not to use these facilities, there will usually be alternatives nearby.

As in most countries, you will need to be aware of petty crime in larger cities. Don’t carry valuables, unless it is necessary. Don’t walk down dark streets on your own or late at night. Keep your wallet, purse, etc. out of sight. Generally, be aware of your surroundings, appear confident and keep your wits about you. If parking a car, make sure it is locked, and do not leave valuables where they can be seen. Don’t walk in dark areas alone at night, and be aware of your surroundings.

It is not necessary to carry your passport for identification purposes; however, as a non-European Economic Area student, you are required to carry your GNIB card at all times.

For more comprehensive information on Ireland, please consult the following Department of Foreign Affairs and Trade publication, Ireland in Brief.

Back to INFO & ADVICE